The beauty of Slimbridge 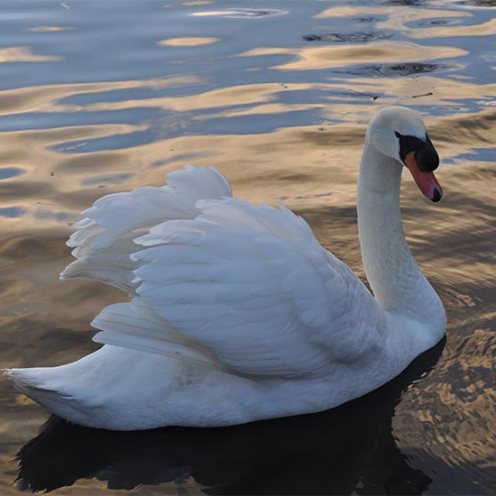 We’d been to Slimbridge about four years ago and I was struck by the beauty and sheer wilderness of this place. Then I had difficulty telling one kind of bird species from another; this time around I managed just a bit better. Although truth be told we felt a little out of it with our really useless binoculars compared to other people who’d come armed with enough tripods, cameras and state-of-the art binoculars to launch several space-ships.

Anyway I digress. It is the peacefulness of the place (if you shut everyone else out), the dramatic winter colours and textures, the variety of birds that, despite the cold, keep us coming back. 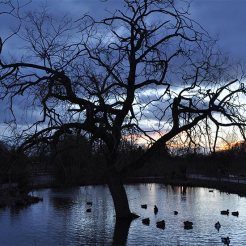 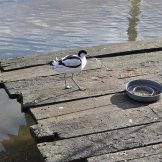 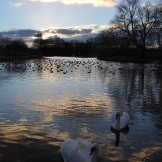 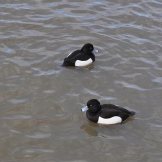 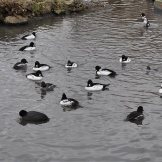 Filed under Days out, Photography, Wildlife

An autumn weekend in Barcelona

In October we went for a long weekend to Barcelona. This was my first visit to Spain, having spent family holidays many years ago in neighbouring Portugal, so I wasn’t sure what to expect.

The first day we wandered around the Gothic quarter and unfortunately ended up on many occasions tail-gating tour groups. But we found the corner of some impressive Roman ruins (the Temple of Augustus) safely housed within a building and then headed for the Cathedral. We then decided to take the Metro and headed towards Sagrada Familia. Talk about queues! Anyway we stood there for half an hour and gave up. We were hungry. To be honest if we’d thought about it a bit more we would have booked tickets before we left to save us on the multiple visits (yes multiple visits!) to this amazing piece of architectural genius that is still being built.

Instead we had a lovely lunch in a cafe nearby with the most amazing orange juice and found our way, amongst all the roadworks, to Casa Batllo. When I saw the front of this building on a postcard it looked so surreal but actually seeing it, it was breathtaking. Inside it was understandably packed (everywhere in Barcelona was) but as usual we took our time and waited. Taking photographs without getting an erroneous arm, head or unexpected tourist in the picture proved to be a skill in itself. 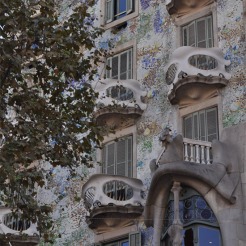 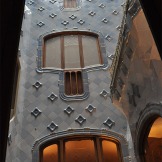 The next day we took the Metro back to Sagrada Familia and joined the long queue which actually moved fairly swiftly. Once we found out while waiting int he queue that the next available tickets were for one o’clock, we decided to get tickets for four in the afternoon and go somewhere else int he meantime. We went to the National Art Gallery of Catalonia although we got off at an earlier Metro stop and ended up on a long walk round one side of the Olympic Park. The approach if you go from the nearer Metro station is spectacular with fountains and steps that wind round and round, however going our way we got some super views of Barcelona.

We then made our way back to Sagrada Familia which was bustling. I’m not really sure how many tourists and tour guides you could fit into one place but everyone was certainly trying! It was busy but once we went inside the sun shining through the stained glass windows was beautiful. An array of colors cascaded onto the walls and floors. The outside is simply breathtaking as well and well worth taking some time to admire the statues and scenes that are worked into the stone. 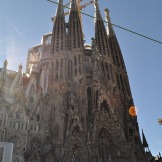 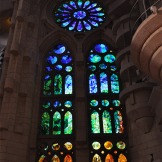 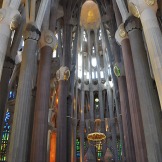 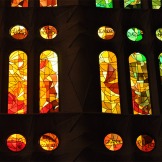 It was packed and although there were signs that this was a place of worship and should be respected as such, at times the noise volume was high – too high and no-one seemed to bother and this detracted from the beauty of the place.

Sunday morning and we made our way to the Picasso Museum. (After having visited Sagrada Familia again to buy a guide book – by the time we got out the day before the gift shop had closed!) I put my camera away as instructed as no photos could be taken inside however I lost count of the many times people went up to the paintings with their phone cameras. Once more the crowds came and went (later on the queue to get in was unbelievable!) but we took our time. It came as a surprise to me that Picasso trained as a traditional artist before experimenting with different artist movements. I think this made me appreciate his art works more. I was also surprised just how many pieces he never finished and they were in these frames – I now understand why my art teacher at school was forever telling us that we didn’t need to finish everything.

I really enjoyed the museum and soaked up all the influences like a sponge but it was tiring and we were glad to finish at lunchtime and get some fresh air. 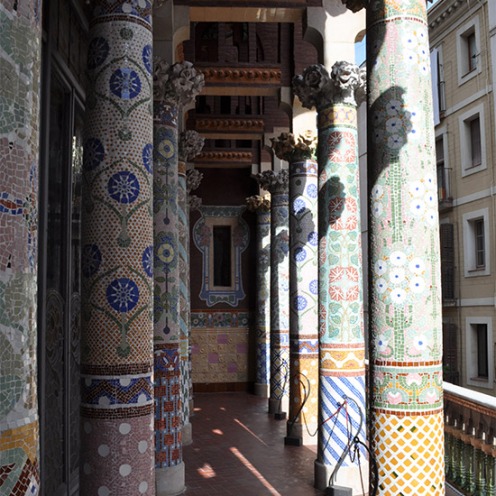 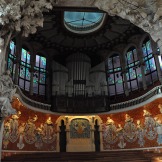 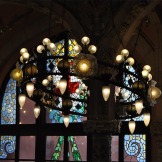 After a quick bite to eat we made our way to ‘the Palau de la Musica Catalana’. The outside stands out like a sparkling jewel. We took a few photos and then booked a ticket for one of the afternoon tours. Apart from attending a musical event, the tours are the only way to have a look at the splendour of this beautiful building (it’s worth it). It was quick – probably an hour and once more it’s a fight with other photographers on trying to take the best photo. We were given a short history of the building and then taken to the main hall and then to the second floor. The skylight that dominates the main hall – no words can describe how gorgeous this is.

We then went for an ice-cream and ended up at the front of the ‘El Bon CC’. There were lots of people milling around and going in and out of what looked from the outside like a nineteenth century railway station. We ventured inside. We found ourselves within this metal structure looking down on what we found out later was the remains of seventeenth century Barcelona. It was an unexpected find. We spent at least two hours wandering around and reading the information boards and trying to piece together what this was and what had happened. The building is a nineteenth century market which has been modernised to protect the discovery of the old street layout.

The market structure possibly would have been removed and the area redeveloped. However as someone who is passionate about history and historical architecture the fact that this structure houses something even older is a beautiful way of linking the past with the present.

(Barcelona was hot with wall-to-wall sunshine in October. On arriving home we were greeted with cold, grey skies and drizzle.)

I’m biased but the one thing I really miss is seeing those wide, open Norfolk skies.

We ventured back for our annual walk on the Wherryman’s way this August. We had lovely weather for it although we did have to hide from the wind and occasional short but sharp shower that came our way. 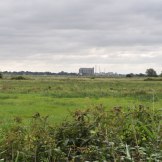 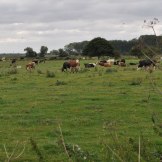 Last time we had walked as far as Buckenham Ferry, so became our start point this time round. My as I stepped out of the car it was blustery. So blustery that a shrew made a not so very convincing attempt at trying to cross the road to the pub. I’d never seen a shrew before but John managed to get it to scamper away into the grassy verge just before a car approached. 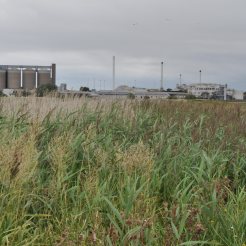 We walked for about ten minutes on the road through Langley where from a distance you can see the some of the remains of Langley Abbey. Then the sugar beet factory in Cantley that was to dominate the landscape for a good part of the walk loomed large in front of us. It seemed really hard to reconcile this large industrial building with what I already knew of the place; that it was in fact where a merchant ship carrying goods sunk in the mid-fourteenth century. However if I looked the other way the landscape was beautiful in a really wild, rugged wind swept way (with a lot of drizzle mixed in for company). I loved it and just couldn’t stop take pictures (I did take some of the factory as well not just the landscape). 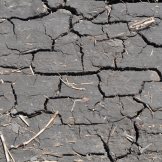 We had lunch sitting with our backs to the Broads and gazing out across fields. From the corner of my eye and if I lined them up properly I could see both a restored windmill and one that had fallen into decay. The dried grasses atop the huge drifts towards towards the waters’ edge were breathtakingly beautiful. Or to put it another way I took an inordinate amount of photographs. So much so that we didn’t progress as far as we wanted to on our walk. The wide open skies here reminded me very vividly of Edward Seago’s depiction of the Norfolk landscape that at times I thought I was actually looking at one of his paintings. 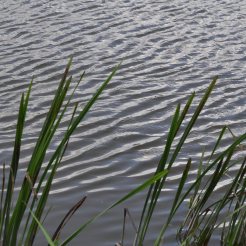 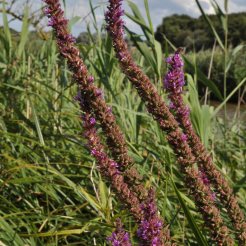 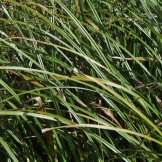 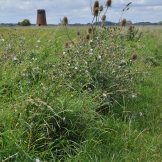 Soon our walk left the side of the River Yare and took us alongside the River Chet towards Hardley and Hardley flood. At times with the water level higher than where we were, walking it felt a little eerie and no more so than when we were navigating through a maze of undergrowth with a clearing of dead trees sulking to the side.  Dragonflies in large numbers fluttered past but thankfully not any mosquitoes or biting flies unlike last year. 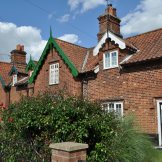 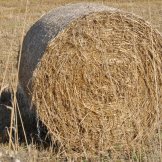 Our journey on the Wherryman’s way ended at Chedgrave which will be a good point at which to pick the walk up from next year. John then cobbled together a shortcut which involved road walking which was by far the worst part of the walk and something I won’t be in a hurry to repeat. And neither will John.